Hugh is 16 months now. He’s a blur of movement, a chattering, singing, hollering fellow, and it feels like he’s got one foot in babyhood and one in full blown kid-dom. Here’s a handful of little things that really seem to capture the moment:

Lately, we’re hearing a lot of Hugh’s suddenly clear-as-a-bell, almost incredulous, “Naoooo!” What delight to tell your mother what you really think! His expression gives off an air of how dare you even suggest it?

Let’s brush your teeth, buddy.
“Naoooo!”
Time to change your diaper!
“Naoooo!”
Would you like a snack?
“… Nyeah.” (So, there’s an affirmative, too!)

He’s become obsessed with Ryan, jabbering on about “Dada,” or “a Dada,” then pointing emphatically at himself — a Dada for me! Sometimes he uses this funny multi-syllabic word that sounds like “wheresadada,” intoned as a question — where’s my Dada? seems to be the jist of it.

Still obsessed with balls! He plops down near the bookshelf and systematically pulls each board book down to flip through the pages looking for balls (or anything circular). Once he’s found one, he points victoriously and says, “Ball!” then casts it aside, moving along to the next one, a semicircle of discarded books piling up around him. 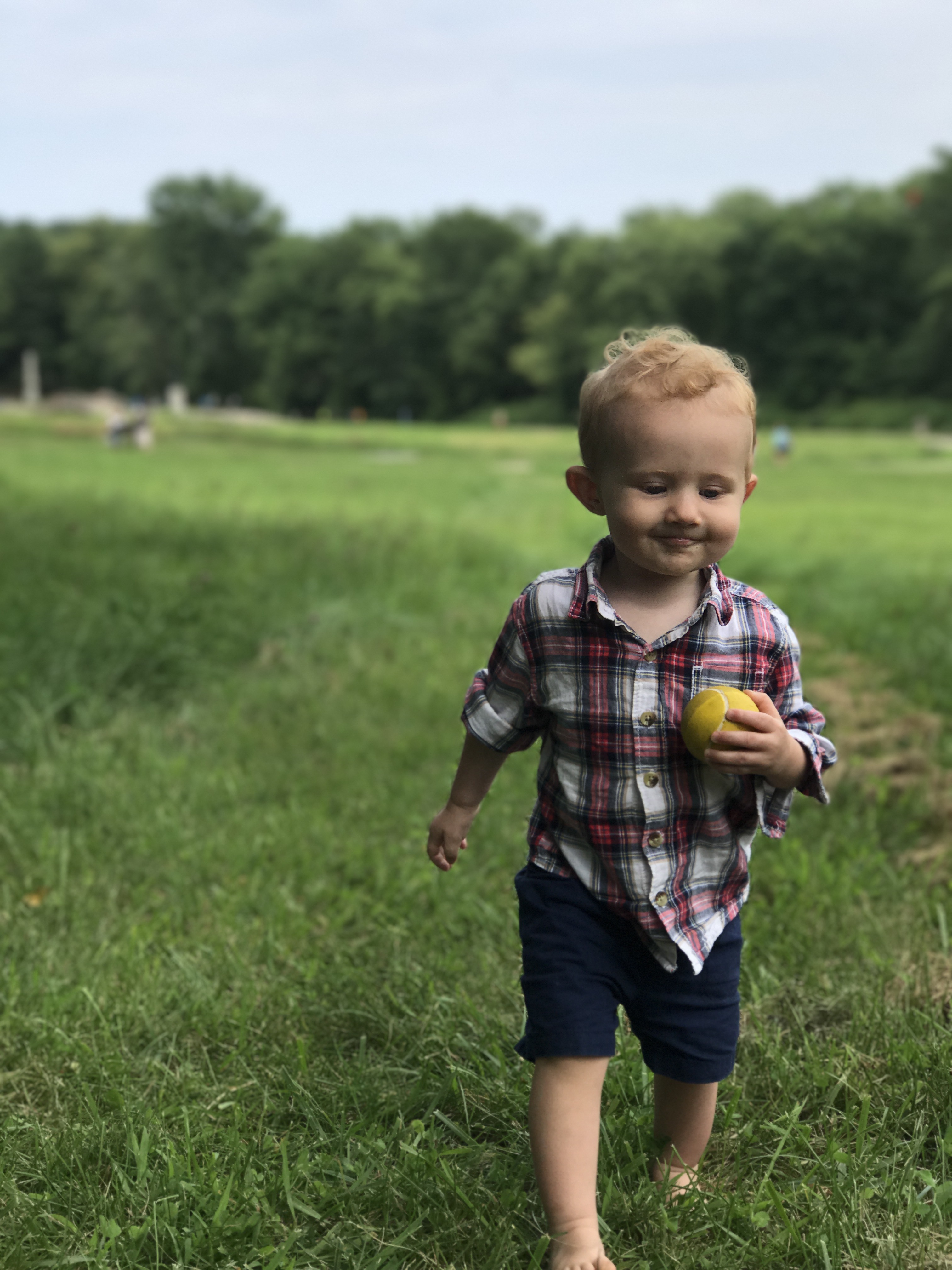 Newly intrigued by trucks, cars, and planes, he’s started to make a kind of half-gurgle, half-motorboat sound when playing with them or spotting one out and about. The other morning as I was nursing him, he drove a matchbox car across my chest, up my neck, and over my face again and again. Toddler multitasking at it’s finest!

Vivienne self-weaned at 14 months, but it seems Hugh won’t give it up that easily. We’re down to twice a day, but he’d still nurse all day if I let him. Especially at bedtime — he loves to snuggle in, and as his eyes start drooping, he sleepily waves at me, a little mid-nurse hello.

We always start dinner with a prayer, and Hugh is suddenly so into it! He usually sits in his highchair watching the rest of us set the table, and then one evening, as we sat down, he reached out his little hands expectantly, ready to pray along with us. It was possibly one of the sweetest family moments we’ve had to date.

After finally admitting that this little flurry was more than a dusting, I realized all the shovels were still out under the barn, so I traipsed down there to collect them at dusk… the view was pretty magical!
Mom’s all set up for in-home rehab and I’m headed back to Boston! Enjoy this edition of “Hugh with bangs” brought to you by my long layover 😂 Found so many gems at my parents’ place when we were getting it ready for her return!
I’ve been unexpectedly out in Michigan for a week here while my mom has been in the hospital with RSV and pneumonia… she has turned the corner and is now working hard to get stronger. Thanks to my sister and brother in law for the open ended hospitality here at the farm, where I’ve been staying with no clear return date! Thanks also to Ryan for his capable single parenting, and to my Y team for managing things so beautifully while I’ve been away! Hoping that early next week we will have clarity about next steps for Mom’s rehab.
Still thinking about this new cake recipe we tried for Christmas: @bromabakery White Chocolate Cranberry Cake, with a little orange zest and vanilla. As delicious as it was pretty!
Forget bedtime, we’ve got the Hogwarts Castle Lego set ✨
Best friends at Christmas!