But the thing is we DO eat a lot of kale at our house these days, in part because we have a steady supply.  Some friends down the road have with an enormous garden and more kale than you can imagine.  They share with us often, so we’ve had plenty of opportunity for trial and error.  So, here are our favorite ways to enjoy it, should you come into a small kale fortune of your own.

First of all, if someone says, “I have way too much kale, would you like some?” Say YES! Take it all. Bring it home, wash each leaf in cold water. Fold those leaves in half and cut out the tough center stem. 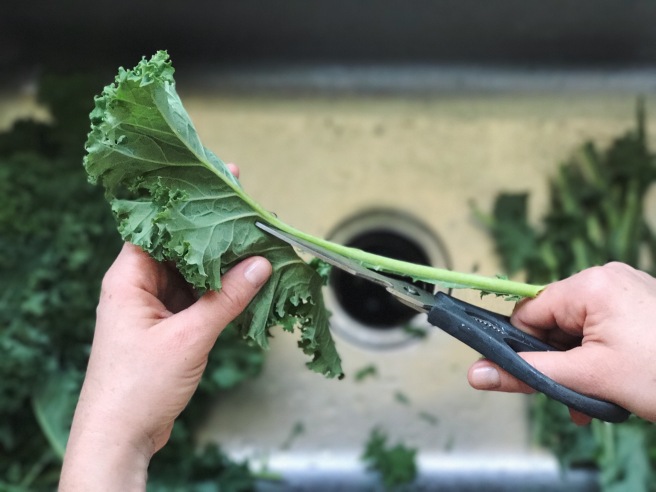 Toss your washed, cut kale leaves on a big dishtowel, and keep working through the bunch.

If there are some smaller, younger leaves, maybe set those aside… they’re less bitter, and you might enjoy them fresh in a salad. More on that below.

Take that pile of clean, de-stemmed kale and stuff it all in a ziplock bag–I mean, really cram it all in there! Pop it in the freezer.

Freezing both preserves it and breaks it down just enough — no more tough, papery greens. Actually, we kind of prefer frozen kale to frozen spinach at this point; it retains more body and flavor than spinach, while still cooking down nicely.

Now, to make something actually good with it…

Making some scrambled eggs? First, chop up an onion, toss a few handfuls of frozen kale in your pan, and saute it all up. Add some salt and pepper. Scramble your eggs in there. So good!

We’ve found that you can happily swap out spinach for frozen kale in just about any egg dish — quiches, frittatas, stratas, omelettes — any time you’re sauteing greens first, then pouring an egg mixture over them. The texture of frozen-then-sauteed kale works perfectly; it’s less watery than spinach, and the flavor is great.

Ryan has tweaked and revised what originally began as a spinach and artichoke dip (so late ’90s!), but has evolved into this easy and delicious update, often raved about and requested by friends:

Mix it up, spread it in a baking dish of your choice (you’re really only warming and browning it, so any size will do), bake it at 350 degrees for 10 minutes or until bubbly, then broil it for just a minute or two until golden.

Serve with tortilla chips, red peppers, crusty bread — whatever sounds good! A great one to mix up in advance and pop in the oven as guests are arriving. (Or, if you really want to impress, bring it to a friend’s house ready to pop in their oven.)

I’m not exaggerating when I say this is the only kale salad I’ve ever truly loved. If you follow me on Instagram, you know that I cook from Deb Perelman’s food blog, Smitten Kitchen, regularly – great flavors, detailed techniques, not too serious. This is another winner!

Try it some summer evening, maybe paired with grilled meat or a quick omelette and cold white wine. Don’t skip any steps… it’s not a quick salad, but if you prep the various elements in advance, it’s very manageable for any level of cooking skill. The recipe includes instructions for how to quickly chop the kale in thin ribbons and recommends dressing it early with olive oil and lemon juice, so it can marinate and break down a tiny bit. It’s delicious!

So, there is it… more about kale than you ever wanted. Cheers!

I saw CATS (play, not movie) for the first time with my sister last night... and no, we were not the only people wearing leopard print. Here to confirm that T.S. Eliot wrote some weird poems. Is it one of the great mysteries how they made it all the way to the stage in spandex and leg warmers? 🐆(Thanks for a ridiculous and super fun night out, Hillary!)
I’m thankful every day for friendships as long and deep as these. Laura, it’s an honor to celebrate your love!
Girlfriend’s first workout in the fitness center - she’s been waiting her whole life for this moment! 💥
Coordinating with the one and only Nancy Mering for church in Maine this morning!
A meandering hike + plenty of chitchat.
... the naughtiest donkey in Bethlehem.